It is rewarding to know how the German International School Toronto has shaped and influenced the students’ careers in both the German and Canadian school systems. We like to tell you about two success stories.

Why did you choose to come to the GIST?

We moved to Toronto as part of our employment assignment in January 2017. Since our son had already attended a German school abroad up to that point, it was obvious that we would stick with German schooling or the German school system.

Were your expectations met?

Our expectations were met – even exceeded – in terms of the content and structure of the curriculum. Further, the Canadian teachers regularly shared content from the Canadian system which we found very enriching.

How long have you been with us?

Our children were at GIST from February 2017 to June 2020. Our oldest child transferred from another German school abroad into the 2nd term of grade 2. The younger one started Pre-K in September 2017 and completed his kindergarten years at GIST.

How was the transition to the German school system?

Our older one transferred from 5th grade to 6th grade at a public high school in Germany. Despite great reservations and the uncertainty for the change from a private to a public school, the transition went smoothly. We noticed that in the subject of history the contents of the lessons were a repetition for him. He was also a little further advanced in the subjects Math and German and had a good overall knowledge. This made it easy for him to make the switch in Germany. The transition is certainly more difficult in other areas, such as from a small class to a class with 25 or more children. However, our children managed it well overall.

Our younger son had no problems academically – the kindergarten at GIST is very structured and the children learn about letters, numbers, shapes and colors early. Thanks to the great kindergarten lessons, our son was very well prepared for the 1st grade in Germany.

How successful was the transition in the main subjects?

In the main subjects, the transition went smoothly. I would like to emphasize that this was also due to the fact that our teachers in the 2019/2020 school year were both German high school teachers who knew the German curricula and its requirements of German schools very well. This was very reassuring for us as a family, as we got different feedback from friends who had returned to Germany from abroad and whose children had some severe gaps. Our thanks go to the two teachers, Kristina Ruban and Johanna Huberth, who prepared our 5th graders very well.

What (long-term) benefit did the GIST have for your children?

I can definitely say that living in Toronto has been a long-term benefit for our children.  The interaction as well as living in the cultural “melting pot” Toronto seems to us to be invaluable – and our children have been able to learn a lot about Canadian culture and people, especially through the local teachers. I think this cooperation and interaction between expat and local teachers should be continued, as it simply combines the “must-have” with the “nice-to-have”

Transition to the German school system

In September 2016 and as a family of four, we started our three-year adventure in Canada as part of my husband’s expat position with BMW. After researching possible schools for our two children, we immediately decided in favor of GIST. Comprehensive bilingual schooling abroad was important to us, and the character concept of the school convinced us immediately. Also, we planned on returning home and knew that the curriculum at GIST would prepare our children for a transition to the German school system.

Our boys, then aged 4 and 7, felt very comfortable, integrated and valued from the very first moment on. Even today, they often talk about their classes at GIST, their numerous positive experiences with classmates and remember many wonderful moments with their teachers.

After a great time abroad and back in Germany, our sons first experienced a different world, into which they fitted just as quickly as they did in Toronto before. In the beginning, the large classes in Germany, the large number of students in the hallways, in the school yard and the less personal contact with the teachers were challenging. However, both sons experienced a significant strengthening of their personality when they realized that they got along very well in class, were able to adapt very flexibly to a similar system and had a clear knowledge advantage, especially in English, Math and German. We experienced our sons as highly motivated students. They effectively network their knowledge and skills, have been reading English books and watching English films since our return. We experience their great interest in everything new, the English language and Canadian culture as a very successful addition to their learning path. We look forward to visiting Canada again soon!

Laurin: “I liked the large selection of working groups and learning was always a pleasure, especially the English lessons!”

Julian: “What I liked best was that everyone at GIST knew and liked each other. I also thought the Camp Pine Crest was great and that two teachers were always there for you in the classroom. “

What other alumni say about our school and curriculum


My name is Laura Ernst and I was born in Berlin in 2000. I attended the GIST from 2011 to 2015.
When I think back to my time at the GIST, happy memories keep coming back. After Grade 9,
I moved on to Branksome Hall, a Canadian IB school.


I’m Amelie Ernst and I was born in Berlin in 2003. I was a student at the GIST from 2011 to 2016.
Even though the class size in my last year at GIST was rather small, we had tons of fun learning together.
My fellow students and I became great friends over many years. Last summer I moved on to Branksome Hall for Grade 8.
The transition from GIST to Branksome was very easy. I hope to find there friends as good as those I had during my time at GIST.


Being a third year Psychology student at the University of Toronto,
I often reflect back to the wonderful education I received at GIST.
The small class sizes and the great teaching staff lead to a personalized
and high quality education, which created a solid base for my future.


We are the Endruweit Family from Berlin/Germany, a “typical” expat family staying for a limited period of time here in Toronto.
Our daughters might want to finish “Gymnasium” back in Germany. GIST was perfect for us to continue with a
German academic curriculum and to make a smooth transition into the English language and the Canadian society.
Even the transition from GIST into the Canadian highschool works quiet well. We valued the familiar atmosphere,
the small class sizes and the good mixture of German and Canadian traditions during the school year.
And GIST parents and teachers are the perfect network for all questions newcomers might have.

Did you or your child attend GIST?

We’d love to hear from you! Get in touch with us via email at info@gistonline.ca.

What current families say about the GIST?

We are happy to share some impressions from our current GIST families. To learn more visit our
Meet our Families website. 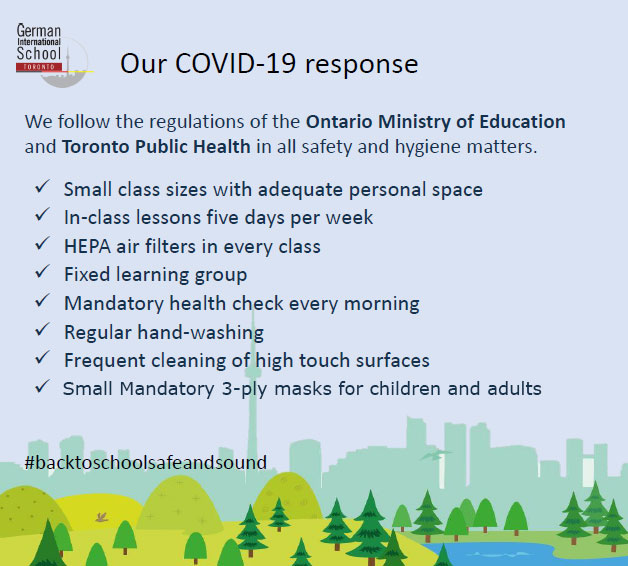